Living History: Ann Miller by Jeff Kagan April 23, 2017 Some people read about history. Some learn about it watching the news on television. But Ann Miller is living history. At 92 years old, Ann has seen so much change in the world as an eyewitness from the horrors of World War II to the wonders of the moon landing. Ann was born on a crisp autumn day in October 1924 in Belle Mead, New Jersey. She grew up on a farm with her mother and father, and two brothers. Shortly after her 5th birthday, Wall Street experienced “Black Tuesday” as the bottom of the stock market feel out, causing the economy of the United States to spiral downward into the Great Depression. At the age of 6, Ann lost her mother. And shortly after that, the farm was afflicted with an outbreak of bovine tuberculosis and the government came in and took away about 30 cows, without reimbursing her father. “That was our livelihood–we sold the milk. Our whole herd went. And not just ours, but the farms around us too. And it was even more difficult on us with my mother just having died. Between the funeral bill, and losing all the cattle, we lost the farm.” In 1930, the family relocated to New Brunswick, NJ to a tenement. The neighbors in the building weren’t aware that a little girl was living there, but when Ann started going to school, it became evident and some of the neighbors complained that it was wrong to have a young girl living with only men. She recalled, “a household with all men and one daughter — you can’t have it! — so, I went to live with my father’s sister in Brooklyn on Woodhaven Blvd.” A new life began as she moved in with her cousins. She was very happy there. She remembers the schools being very crowded. Ann’s father took a job with the Civilian Conservation Corps (CCC), a public work relief program which ran from 1933 to 1942. The program was part of Franklin D. Roosevelt’s “New Deal” that helped unmarried, unemployed men to earn a living and support their families. The job paid a few dollars a month, but it was enough to get by. After about two years, Ann’s father came out of the CCC, and his sister found him a job at Laubenheimer & Co. in Bayonne. “Everybody used coal back then, but oil was just coming in. My father drove the oil truck. Before that, it was all coal. That’s what we used.” she said. While she was very happy that her father had brought the family back together, she understood the difficulties he faced by raising the children on his own. They lived on whatever he made, that he didn’t “drink up.” From Friday night to Monday morning, he wasn’t sober. “He was stuck with three little kids and no mother to raise them. He had a hard life. He was a veteran of WWI. He served in the Army, ground forces in France & Germany.” 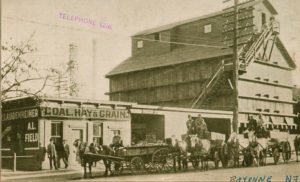 Soon Ann was a young lady, and she began to meet young men. “We’d go down to the park, where everybody parked, or we’d go to a movie if we had the money. Money was scarce.” And that’s where she met Carl: “We met on August 1st, and by May 17th we were married. We were both 17 years old.” Carl’s nickname was “Boots”, which went back to his childhood, when he would only wear boots. His grandmother gave him the name and it stuck. In December 1941, the world had changed for Ann and Carl with the attack on Pearl Harbor. This brought the United States into World War II. Ann’s brother, Arnie was in the Navy, and in dock on a destroyer escort ship when the bombs started falling. He lost many friends that day but was lucky enough to have survived. When Carl turned 18, he signed up for the draft. Just before he enlisted, Carl and Ann were married. Soon after, he was shipped off to Sheppard Field, TX for basic training, and then Amarillo, TX for engineering training. Ann followed him down to Texas and lived with him. Next he was sent to Tampa, Florida, where their oldest son was born. But just a month after the baby arrived, Carl got his new orders: he was heading to Europe. He called his mother and said, ‘I’m going overseas. Can Ann and the baby come live with you?” His mother said, “Where else would she live?” It was July, 1944. Carl’s plane was called “Umbriago” which means “drunken fool”. It was most likely named after the famous Jimmy Durante song that played all over the radio. 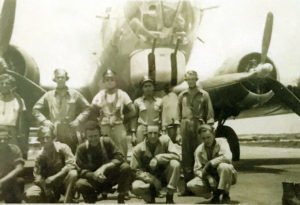 The war was difficult for Ann, as a young mother, worrying every day about her husband. One day, her worst fears came true. She received the news that Carl had been reported missing in action. But something inside told Ann that this wasn’t the end. Carl had just flown his 13th mission, on September 11, 1944. The plane was shot up badly, “waist & tail”, and spun out of control, diving downward with a streak of black and gray smoke. The German fighter pilots didn’t pursue them, assuming no one could have survived, but around 7,000 feet, Carl’s pilot was able to pull them out of the spin and stabilize. They would have bailed out, but their tail-gunner was badly wounded and the crew wouldn’t leave him.  The navigator spotted a field and they crash landed in France. German snipers were all around, so they had to act quickly. The “Free French” were out there in minutes and escorted Carl and the rest of the crew to a safe hiding place. The tail-gunner was taken to a local hospital, where he recovered and was sent home. “I got the telegram that said Carl was missing in action. His mother and father were devastated. They knew he was dead, but I said, ‘No he’s not.’ I just knew he was alive. And then later, I got a letter from him before I heard from the government that he had been found!” After Carl and the rest of the crew rejoined the American forces in Europe, they went back and finished 20 more missions. The entire crew was awarded the air medal. After the war, in 1950, Ann and Carl bought land in a small town called Old Bridge, in Madison Township, New Jersey. Back then it was all farmland. They paid $1,800 for the land and they built a home on it. “When we first bought it, we raised pheasants. Our kids were in 4-H, a youth development program. We raised 400 birds per year. We got the chicks on June 1st, had to put up the brooder house. Then October 1st the state came and bought them back. They were liberated, for conservation (hunting) purposes. The kids made a few bucks, and put them aside for college.” Across the street from their farm was Walt German’s Chicken Farm; he was the mayor of Old Bridge. Ann’s oldest son worked on his farm after school, picking up the eggs and cleaning the chicken coops.

Life was simple. It was a different time. For entertainment, people would go to the movie house in Matawan. Main Street was the place. Everybody went there for whatever they needed. The neighbors would host picnics and all get together. There were no supermarkets, only local markets. Once a week, Ann would go to the Applegate’s Grocery Store on Spring Hill Road and Route 34. Groceries were purchased “on the book”, and paid for at the end of the week Switching gears, Ann and Carl opened a hardware store in the mid-1960s: Harris Hardware on Main St. in Matawan. Mr. Harris had originally opened in 1908, and when he retired, his son took over, but didn’t enjoy it at all. Long story, short, Ann and Carl bought the business from the Harris family and kept the store going for almost 40 years. And business was good for them. The store became a staple within the community. Laughing, she points to her head and says, “You gotta use this for something other than a hat-rack.” Life continued for the Ann, Carl and their five sons. In 1975, the same year that Madison Township changed its name to Old Bridge Township, there was a little excitement for the Millers. In the middle of the night, the family cat, Bunker was howling “something awful” in the kitchen. Carl hastily got out of bed exclaiming, “I’m going to kill that cat!” He went into the kitchen and discovered that the house was on fire. Fortunately, everyone made it out safely, and realized that they owe their lives to their cat, Bunker, as things may have ended up much worse. Once they closed the store, in 2003 Ann found that she had a lot of free time on her hands, so she decided to become more involved in the community. She became a very active participant at local town council meetings, citing, “I’m not politically involved, but it’s my town! In addition, Ann joined the Madison Township Historical Society, an organization she had known well as the hardware store was a frequent supporter. Eventually she would go on to serve as the organization’s President, and she’s still involved to this day. Sadly, Carl passed away in January 1999. But she looks at what she has in her life, and she’s grateful. “I have 5 children, 6 grandchildren and I think it’s up to 8 great grandchildren now.” And she jokes about her husband’s passing, “What he did to me, leaving me like that, the dirty rat! When I see him again, I’m going to punch his lights out.” She smiles and says, “Ahh, he won’t let me do that. He’ll probably grab me and give me a big kiss.”

Jeff Kagan is the current Recording Secretary of the Madison Township Historical Society.